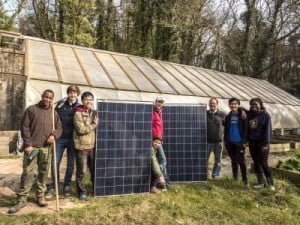 PROINSO’s first donation has been made to UWC Atlantic College in Llantwit Major, South Wales. The equipment will be set up in the college’s ‘Valley’, an on-site kitchen garden. They will primarily power a greenhouse run by students which houses an assortment of vegetables and plants, while also allowing them to experiment with different food growth techniques.

The aim is for students in Wales to compare renewable data with peers around the world, to see how different climates impact on energy usage at schools in countries such as Canada, China, Costa Rica, Norway, Singapore and Swaziland.

At UWC Atlantic College, students split their week equally between their IB studies and co-curricular activities, with the college’s mission stating that environmental responsibility forms part of its overall goal to make education a force for peace in the world.

Students also play an active role in the college’s Sustainability Council. The Council works continuously to develop the Sustainability Charter, which is fully acknowledged by the College’s management team, and regulates on everything from day-to-day student activity to assessing green credentials for school suppliers.

Asbjorn Damhus, a teacher within the environmental faculty at UWC Atlantic College, said: “We are extremely grateful for this donation from PROINSO. We have for many years talked about and studied photovoltaics, so having this instalment in the Valley is exciting for both staff and students.

“We will be experimenting with growing herbs and vegetables using LED growth lights and hydroponic techniques that require pumps. The PV panels are part of a larger picture, teaching sustainable lifestyles to the future inhabitants of the planet. As an added bonus we hope to do comparative studies of solar power viability in all UWC locations worldwide.”

Estitxu Alvarez, Head of Corporate Social Responsibility at PROINSO, added, “We are delighted to be able to donate this equipment to UWC Atlantic College and look forward to seeing the results from the student’s analysis. UWC as a whole were a perfect partner for this venture, not only because of their truly global scale and reach, but also due to sustainability being such an intrinsic part of their mission.”