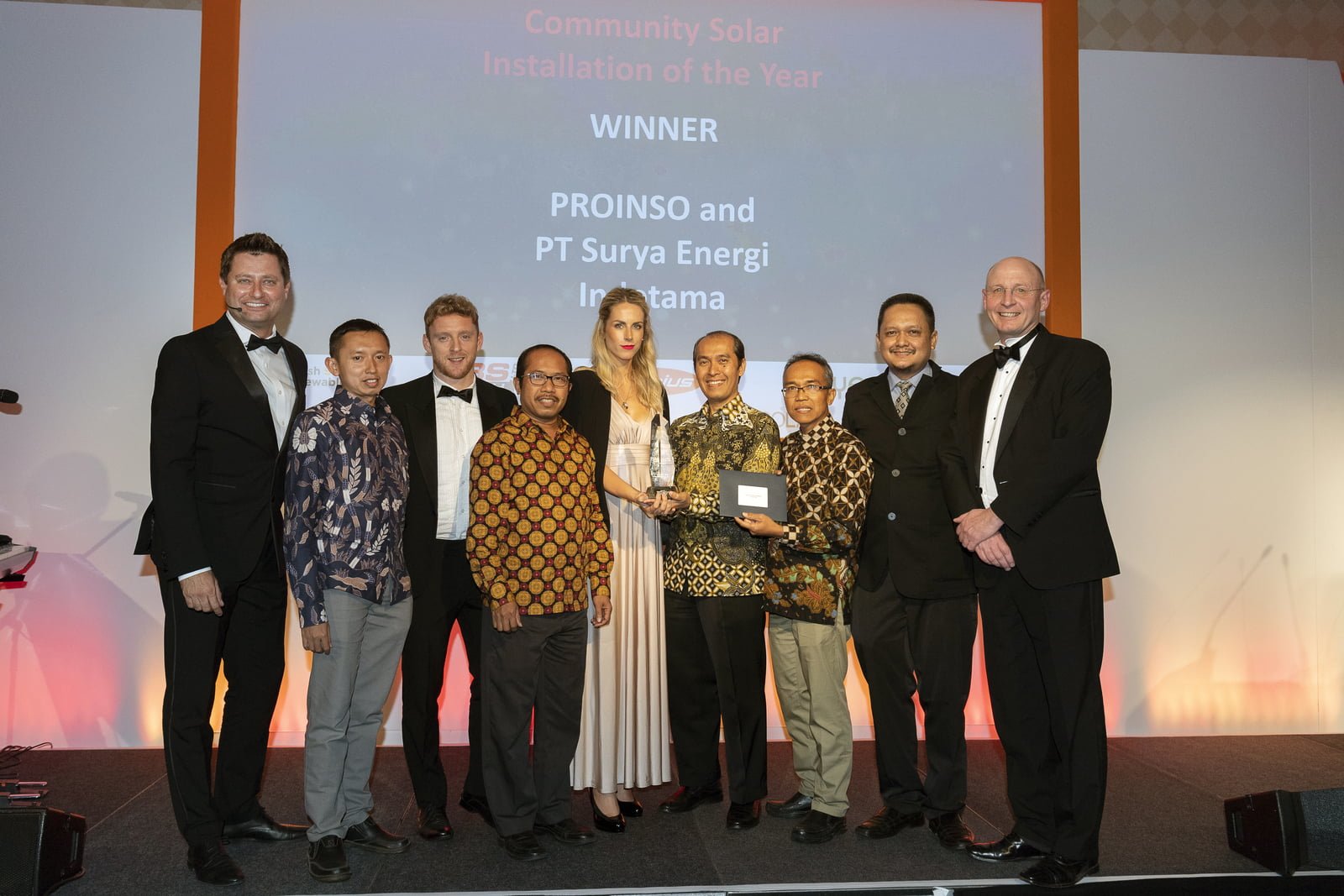 Photo: PROINSO and Surya delegations received the award at the gala ceremony in Birmingham, UK on October 17, 2018

United Kingdom (30 October 2018): PROINSO, a global leader in the solar energy market, and its partner PT Surya Energi Indotama (SEI) have won the Solar Power Portal Award 2018 in the category “Community Solar Installation of the Year” for the 492kWp mini-grid project in Indonesia.

PROINSO and its partner PT Surya Energi Indotama have completed over 40MWh of  mini-grid projects in some of the most remote and challenging environments since 2012. Their latest project, the 492kWp mini-grid installation in East Sumba island, has won the Solar Power Portal Award 2018 at the gala ceremony on October 17th in Birmingham, United Kingdom, attended by over 500 clean energy professionals from the UK and beyond.

The awards were judged by a panel of 12 industry experts from the leading renewable energy and professional service companies.

Following PROINSO’s short-listing in two categories this year, PROINSO and Surya were announced as the winners in the “Community Solar Installation of the Year” category. Their 492kWp distributed generation project in Indonesia, completed in partnership, has brought electricity to over 900 households and public facilities in the East Sumba island. The project was commissioned in April 2018.

Prior to this project, inhabitants of the five East Sumba villages had no access to electricity. They normally used micro solar home systems for lighting. East Sumba residents can now consume up to 300Wh of electricity daily per household, which is sufficient for basic daily needs such as lighting. The system also powers street lights that are scattered along the system.

This project was completed under the Green Prosperity Project program run by the Millennium Challenge Corporation in Indonesia, a bilateral United States foreign aid agency. The objective was to increase productivity and reduce the dependency on fossil fuels by broadening the use of renewable energy alternatives. The project resulted in reduction of greenhouse gas emissions based on improved land use practices and natural resources management.

Robert Forrest, Commercial Director – SEA at PROINSO said: “This is yet another award we have won for our mini-grid projects and we are pleased to be recognised as a leader in this market segment. PROINSO’s business strategy is based on global experience and local expertise which we see as the key for successful deployment and operation of projects while ensuring that both local capabilities and revenue retention is enhanced. We have a long track record of success with PT Surya Energy Indotama which we are looking to further enhance.”.

The system relies on smart-metering payments in which users pre-pay for electricity via their mobile phones. As partial owners, community members take part in managing project operations and maintenance. Parallel  to construction of the facilities, the project provided training opportunities to more than 250 women and men in the villages. This included training in entrepreneurship, management, agriculture, and value addition (such as baking using locally available ingredients).

Bambang Iswanto, President Director at PT Surya Energy Indotama said: “We are pleased to see this project generate positive effects beyond energy security, being gender equality, health, and environmental impact. The successful completion of the project is due to good coordination among all stakeholders involved, namely our company, our principal partner PROINSO, project implementers, consultants, local authorities and local community.”.