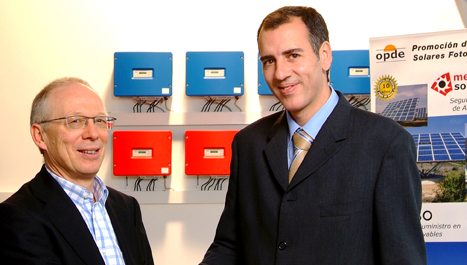 Last January 19, Javier Remacha, PROINSO General Manager, and Günther Cramer, one of the founders and member of the SMA Board of Directors, signed an agreement under which PROINSO became the official, authorised SMA distributor for the Spanish market.

The German undisputed European leader in inverter manufacturing trusted in PROINSO’s capacity to be one of its outstanding distributors in Spain. The sales capacity and overall knowledge that the PROINSO engineering team imparts to its clients led to this agreement.

PROINSO selected SMA inverters as one of the key products to include in its catalogue due to the technical service that it provides in Spain.