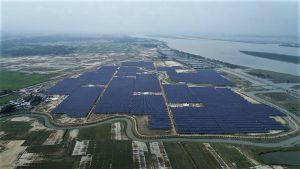 United Kingdom (20 September 2018): PROINSO, a global leader in the solar energy market, has won the Asian Power Award 2018 in the category “Solar Power Project of the Year – Bangladesh” for the 28MWp utility scale project in Bangladesh, completed in partnership with Joules Power Limited (JPL).

PROINSO and its client Joules Power Limited have been announced as the winners of the Asian Power Awards 2018 at the gala ceremony on September 19 attended by over a hundred senior executives and prime industry figures in Jakarta, Indonesia. The 28MWp project in Teknaf, Bangladesh completed in partnership was selected by the judges as the “Solar Power Project of the Year – Bangladesh”. The project is the first large scale solar plant in Bangladesh that commenced commercial operation earlier this month.

Technaf Solartech Energy Limited (TSEL), a subsidiary of Joules Power Limited is the first step towards the government’s target of producing 2,000MW of solar power by 2021. The Project’s foreign currency financing is being arranged by Standard Chartered Bank with a risk guarantee being provided by GuarantCo part of the Private Infrastructure Development Group (PIDG) and local currency component being arranged by a consortium of Bangladeshi Banks led by One Bank Limited.

Kunal Chandra, Managing Director of PROINSO South Asia said: “This project is a demonstration of both PROINSO’s business philosophy and global capabilities in solar projects. We believe that a strong collaboration between global and local businesses and institutions is the key to achieving long-term sustainable growth and reaching renewable energy targets, as defined by the Paris Agreement.”

The solar PV plant will cover up to 80% of the present electricity demand of the entire Teknaf region and result in reduction in CO2 emissions of 20,000 tons each year, with estimated 400,000 tons of carbon dioxide emissions to be prevented over the next 20 years.

“This project showcases the immense opportunity there is for Solar IPPs in Bangladesh, and paves the way for future projects in the country. The finance structure has also been unique and a first for Bangladesh with the involvement of GuarantCo which shows international confidence and the bankability of the Power Purchase Agreement (PPA) and the Implementation Agreement (IA) the Bangladesh Government has to offer. We would sincerely like to thank the Prime Minister’s Office of Bangladesh, The Power Division of the Energy Ministry of Bangladesh, Bangladesh Power Development Board and the District Commissioner’s office of Cox’s Bazaar for the immense support we have received for the successful implementation of the project” said Nuher L. Khan the Managing Director of JPL and TSEL.